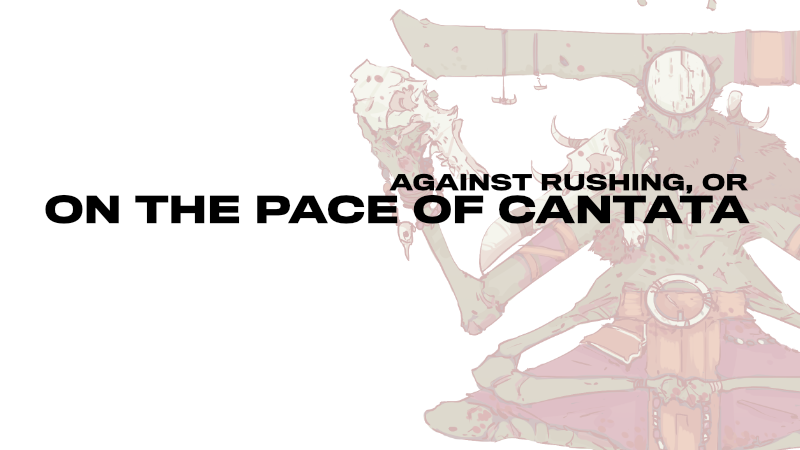 Welcome back to another blog! Today’s discussion, inspired by some forum posts, focuses on the pace of the game, and how that pace differentiates Cantata from other games in the genre. A frequent concern among many strategy and tactics fans with any new entry in the space is the viability of rushing as an effective stratagem. A game can easily tout its many systems and complex intricacies of combat modifiers, terrain effects, etc, but if a player can ignore that all, mass build a single unit, and run across the map towards victory, it’s easy to feel like strategy doesn’t matter. Which, in a strategy game, is a big issue.

Frequently, rushing can feel like something of a gimmick: a tactic that relies less upon situational awareness and decision-making and more upon following well-established guidelines or build-orders, and whose success largely depends on the surprise of an early attack. In turn, the failure of a rush usually depends upon the rush-target virtually guessing that their opponent will rush: given the speed with which rushes occur, there’s usually little time to scout-out an oncoming rush, thus, to counter a rush, a player must take a leap of faith. If they guess correctly, then the rush will often be defeated, along with the rushing player; if they guess incorrectly, then the ‘defending’ player will have spent unnecessary resources countering a threat that they could not have safely anticipated, thus falling behind.

There are of course many issues behind the ways rushing unfolds like this. The extent to which a rush unfolds according to timelines prohibiting scouting or other forms of information mean that players are forced into blind game-theory calculations: defend against a hypothetical rush and risk an unfavorable opening, or proceed as though there is no rush, and risk almost instant defeat? This sort of calculation, which relies upon metagame psychology does have a place in Cantata, but not necessarily with the severe stakes which often accompany rushes. Particularly in a game like Cantata, where thoughtful development is an intended and significant feature, we simply don’t want the game to devolve into memorized build-orders and minute-matches.

It’s also important to internalize the philosophy of Cantata as a game that, in general, is designed to be thoughtful and mediative. It isn’t some puzzle placed in front of you to solve under a major time constraint, nor is it some massive empty galaxy for your to project yourself onto. Instead, it’s a space to explore and discover in, a place to, yes, build your base and your units and take out the other player, but also a place to work with the planet you’re occupying and discover its intricacies. Everything we’re doing in the game tries to get at these ideas, so trying to play the game in a hyper-optimized rush strategy is just going to feel… wrong. Surely you can attempt something like a rush in Cantata no matter how much we discourage it, but rushing, or a quick victory in general, is just not the sort of outcome we’re trying to encourage in Cantata unless it’s for a very specific moment in the campaign.

So, how does Cantata work against rushes, and the general ethos of a fever pitch pace? We’ve actually touched on many of the instrumental ways in previous Cantata 101’s with ideas like Action Points, Supply and Terrains, but a better way to frame the question so it isn’t in the negative is “How does Cantata facilitate meditative (as opposed to rushed) play?”.

The key idea is to make every decision have the possibility to be a thoughtful one. Any action you take is never “free”, and for each action there is some price you pay. Action Points play a key role in this, as any movements or attacks players perform pulls from this bank of points each turn. Want to try and rush in the early game? You’re going to burn all of your AP trying to move your units across the map, leaving your home base totally exposed as you won’t have enough AP to build crucial early buildings. Supply works similarly as a finite resource. If you use all your supply to build an early army with basic units, that’s what you’ll have all game. No moving a probe to some other resource dump to start a whole new base. Add on the last aspect, Terrain, which operates both to slow movement unit and also as a sheer scale factor: as previously noted, Cantata maps are sizeable! “Rushing” would have to take many turns to do, and if you’re only moving units, you’re wasting tons of time and turns.

All of that said, we of course want to encourage aggression and player activity, and it would be a mistake to consider these restraints as artificial guardrails, or as overly favoring defense.  Rather, we find that they’re tools that organically push matches to the logistical pace that we’re targeting. We want players to feel rewarded to successfully developing complex but efficient supply networks. We want Expedition Experience to matter, and we want exploration to feel as potentially rewarding as combat. You’ll never have a sprawling, effective supply network if you never stray far from your base node. Your expedition experience will stagnate if you don’t take steps to explore and expand, which will inevitably grant your opponent(s) a considerable AP advantage, and leaving your CO with fewer unique options and tools at your disposal. The goal is for players to feel their growth over any given match, and their logistical and organizational choices should matter as much as minute tactical decisions. Of course, just exploring, organizing and consolidating your supply network won’t be enough to bring you victory – reasoned aggression and risk-taking alongside studious management of your networks will bring far greater rewards than Turtling, Rushing, or any simple strategy as well. Playing Cantata well is a balancing act, and one we can’t wait for you all to get your hands on.