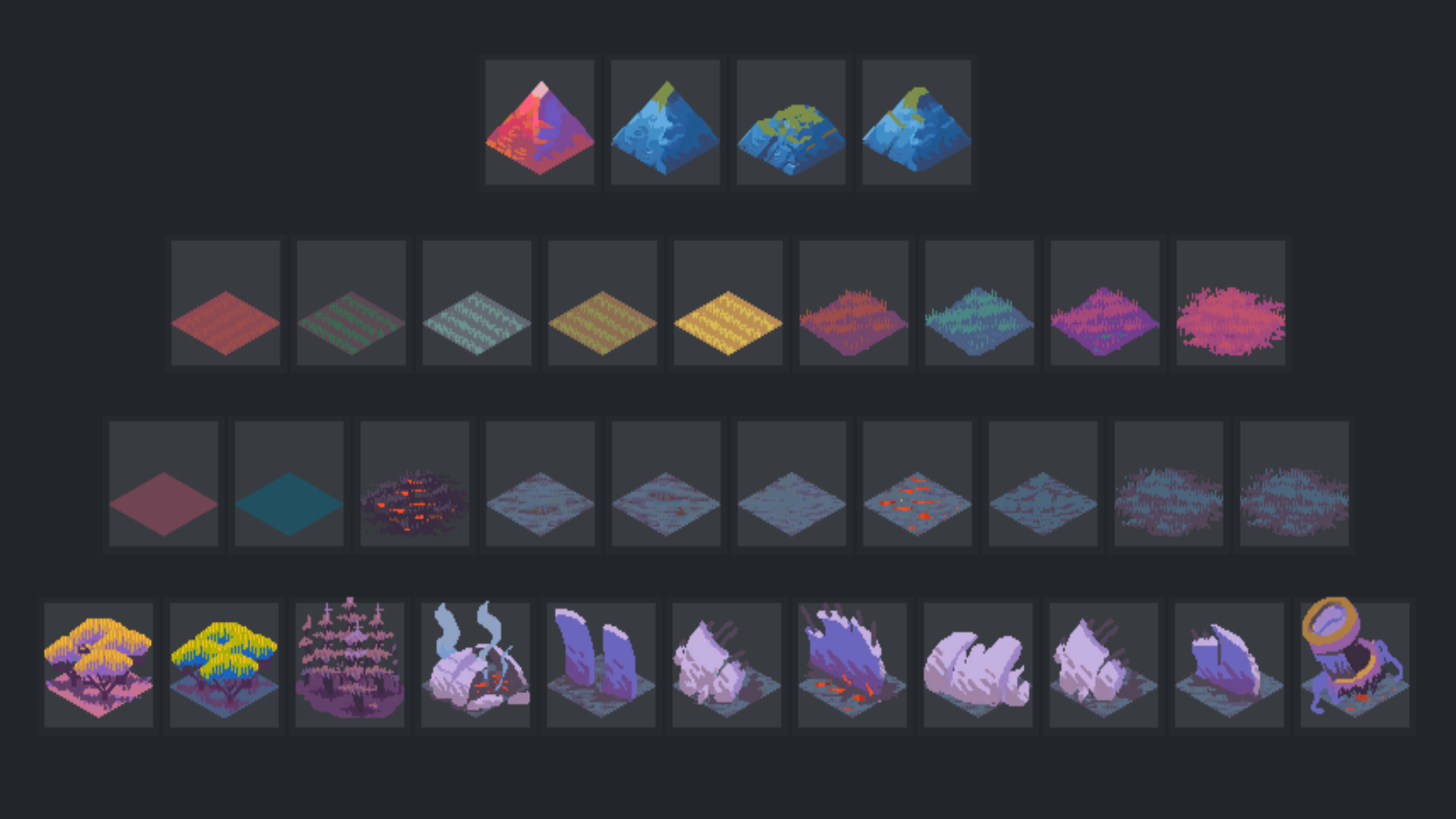 Learn about how terrains work in Cantata!

Sun Tzu, Hannibal, Saladin, Clausewitz: the list of major military leaders, thinkers and writers throughout history could stretch on indefinitely.  While their resources, successes and legacies varied, they all shared at least one important quality – an appreciation of the relationship between terrain and strategy.  With foresight, terrain can be both weapon and shield; with poor judgment, it’s a tool for self-destruction.  Terrain has played a pivotal role in strategy and tactics games for centuries and Cantata is no exception.

Terrain shapes the action in Cantata in two main ways: by impacting unit and building’s vision as well as their movement possibilities. Vision plays out in Cantata in many of the ways you might be accustomed to.  As units move, they reveal more tiles in an area around them. This area provides you with information about the world, regions to explore and of course your opponents’ movements. How much a unit or building can see is determined by their “Vision Strength”, a number which represents how penetrating a unit’s vision is. A Unit with a vision strength of 5 could theoretically see up to 5 tiles away.

However, different terrains affect whether or not this will be the case. For a unit to reveal a tile, it essentially needs to pay the “vision cost” of a terrain to see it. This cost is usually thematically linked, so “open” tiles like prairie or grassland have a low vision cost, while boggy mushroom glades or forests have a higher vision cost. Terrains like mountains may have incredibly high vision costs, meaning they obstruct vision entirely unless you’re directly adjacent to them.

In terms of movement, the system of Cantata’s weights and capacities system is something almost entirely new, and a core feature we’re excited to introduce! Everything you can place on the map in terms of units and buildings have a “weight”, and every terrain has a “capacity”. As with vision, capacity is based on the terrain type; “open” terrains like grasslands will trend towards fairly high capacity, while “closed” terrains like mountains or chasms have a low tile capacity. In order for a unit to either move to or through a given tile, that unit’s weight must be less than or equal to that tile’s capacity.

This means that smaller units, like human Conscripts, have a relatively large freedom of movement due to a low weight, whereas bulkier units like robot Walkers might find themselves unable to traverse mountains, or even particularly dense forest, due to a higher weight.  Additionally, when a unit enters a tile, the tile capacity decreases by the weight of the entering unit. So a 10 capacity tile that takes on an 8 weight unit now only has a capacity of 2 while that large unit is standing on it.  It’s worth noting here as well that units cannot stack on a tile, thus, an enterprising and strategic player may find opportunities to restrict the movement of their enemies via control of difficult terrain by means of tile weight. A line of large units across a narrow pass could prevent opposing large units to move through, creating a crucial bottleneck to slow an advancing force.

Lastly, there is a more traditional system at play in terrains, which is the idea of “movement costs”. Units that can move will have a movement range, and, to move to a tile along any path, must pay that tile’s movement cost. Again, open terrains will have low movement costs, and more “closed” terrains will have higher costs. This helps balance general movement in the game in terms of the other two terrain systems. Without it, smaller units like the aforementioned conscripts could simply waltz across a whole mountain range in a turn, effectively flattening what makes the map interesting. Terrain movement costs make it such that moving across terrain can be as difficult or as easy as we want it to be.

A final aspect of terrains in Cantata is that these numbers aren’t static. In fact, they’re heavily variable.  Tile weight of course can be changed through the movement of units, but may also change depending on external conditions that alter areas of the map. Likewise, visibility may change according to similar happenings but also through proactive player actions. While exploring the map, the player might find strange objects like floating balls of spores called mistbulbs that provide opportunities to impede vision of an opponent. Attacking a mistbulb fills the air with vision-obscuring spores, rendering it difficult for players to see through or around the generated mist.

Moreover, given the logistical, city-building scale of Cantata, terrain has far more enduring consequences than many other games.  A mountain-range, a savannah, or a river are not just temporary sights, but long-term components of your coordination and planning.  Securing durable and effective supply-lines through stretches of treacherous terrain will be a challenge, but one that might prove deeply rewarding when it comes time to reinforce distant flanks of your expedition. Do you expand and explore according to the path of least resistance, proceeding quickly along the open plains to your north, or do you take the slow ride to the south, through the unwelcoming marshlands, with the knowledge that your opponent will be as hindered as you are, unable to quickly strike against your centers of supply? Together, the terrain systems of Cantata can provoke and promote some great strategic decision-making.

Lastly, all of these parameters on terrains are open to modification via modding! We purposefully didn’t bake in any assumptions about terrains and what they allow via keywords — we didn’t want players to have to remember a complex movement matrix of what “treads” could or couldn’t move through versus the capabilities of “wheels” and so on. We wanted a system that was flexible and able to be extended or expanded for anyone’s needs or imaginations and thus be immediately intuitive if playing someone else’s mod. Want to make all open tiles have 0 capacity and mountains have 100? Do it! Or you want to simulate a really dark map, and want to give all tiles high vision cost and move cost — go ahead! The game will flex to what you want to do, and won’t require you to assume a certain type of unit or building.  The choice, and its consequences, are yours!

The leaders of your faction