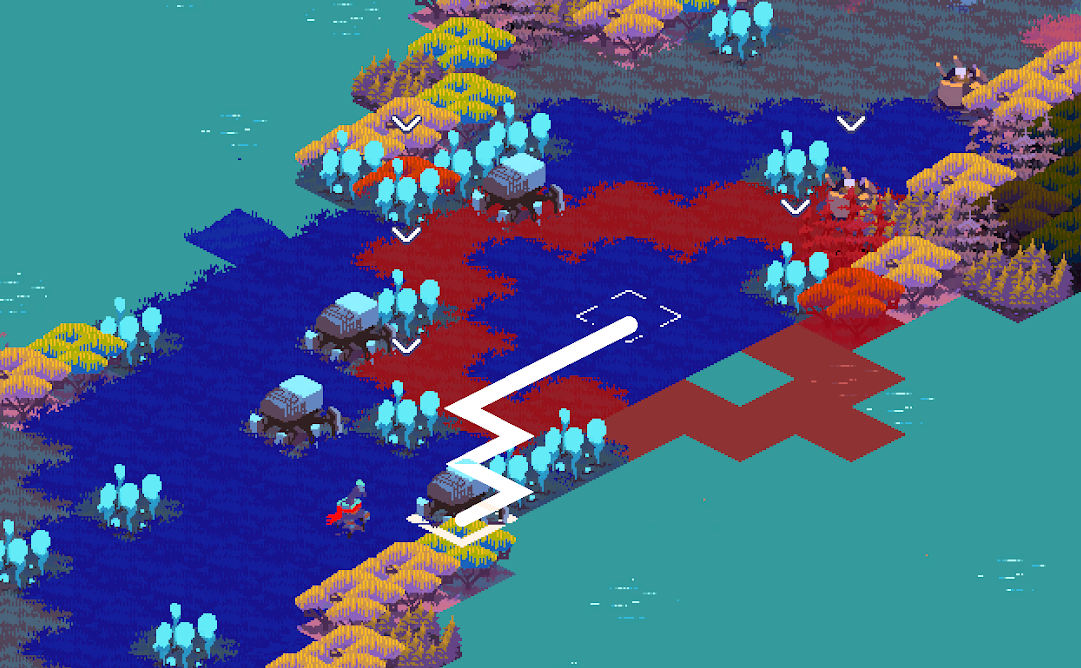 Hello everyone and welcome back to another Cantata Alpha Perspectives! This post will be the third and final in our series on the Demo Map, including the conclusion of our heroic Drone’s harrowing journey to safety! In our concluding episode, we’ll be focusing on combat, tactics and bringing together the themes of the previous two episodes, while also beginning to gesture toward triggers and other elements of map-making we’ll be delving into in future updates. Bearing all that in mind, let’s dive right in!

When last we left our hero, the Machine Drone (and a few Walker allies) had encountered mistbulbs, and quickly recognized their potential use in controlling vision and terrain on the battlefield. Having secured a section of meadow and experimented slightly with mistbulbs, the player will guide their forces forward, encountering further entrenched gunners who seem to be guarding a marshy strip of land which separates the crash site from the safety of the distant machine base!

By this time, the options at the player’s disposal should be fairly apparent – if you’re entering dangerous, unknown terrain, and you have the ability to shape things in your direction, do so! And so pop go the mistbulbs.

Of course, the drawback in this scenario is that the mistbulb detonation hinders our line of sight as well – fortunately, if you know where the foe is, you can easily emerge from the fog and quickly seize the upper hand.  And as Vashti suggests, the marsh bridge is the only way forward, so there’s option but to use the tools at hand!

Putting it all together

By this point in the Demo Map, we’re expecting players to have a good grip on the various levers at their disposal: movement and attack ranges, vision and terrain costs as well as environmental manipulation. As the player crosses the bridge, we really start to take off the training wheels as the Humans guarding the bridge passage take increasingly fortified and overlapping defensive positions.

For the sake of this Demo Map, Walkers serve as incredibly powerful units which are capable of standing up to incredible abuse and dishing out immense damage in a single shot. As such, four Human Gunners pose little threat to four Walkers supported by our Heroic Drone. Overconfidence can easily signal defeat in Cantata, however.

Across the marsh crossing its not just Gunner positions, but a powerful Angel Clipper cannon as well. These fixed cannons boast a truly incredible range of fire and firepower to match. In the above scenario, our player may have risked overextending themselves, as the furthest forward Walker is well within the attack range of the Angel Clipper.

A mistake such as this can easily prove fatal as we see here, wherein even a distant shot from the Angel Clipper is sufficient to cause severe damage to the Walker – and that’s before the Gunners get involved! The Machine units by contrast have no hope of closing that gap this turn. At this juncture, the player might have several potential options: commit fully to a frontal assault and hope for the best, attempt to pick off those Gunners which are in range to mitigate the damage of the enemy phase, utilize the surrounding mistbulbs, or abandon the wayward Walker, await reinforcements and hope for the best. Our player here seems to have taken a (dis)liking the mistbulbs, and thus chose to pursue that strategy.

With such overwhelming enemy fire precision will certainly be required in executing the breach from beyond the mistbulb spores. Once you’ve committed to a gambit such as this, there’s no going back however; your hand is shown and the mistbulbs won’t be returning. As Vashti says, there’s no choice but to “Keep pushing!”

As we can see above, our Machine player has slightly miscalculated. While the foremost Walker is just able to attack the Angel Clipper, the Walker just behind is out of range; and unlike Gunners, the Angel Clipper is more than able to take a few hits. With a misplay like this, there simply isn’t enough firepower to bring down an Angel Clipper this turn.

The retaliation is deadly. Between the Angle clipper and the three Gunners (one of which was hidden in the tree line, behind the spores), one Walker goes down, and another is critically damaged. Additionally, the cover granted by the mistbulbs is beginning to dissipate, meaning that retreat is becoming an increasingly dicey proposition. All three Walkers are in position now though and can easily strike – another choice: try to bring down the Angel Clipper, or eliminate the supporting weaponry. The player here chooses to aim for the Angel Clipper, fearing its ability to bring down a Walker in a single shot.

The gambit succeeds! The Angel Clipper falls, and the mist cloud clears over a battlefield decisively in control of the Machines. With the Human war machine destroyed, the remaining Gunners pose a minimal threat, and our Drone hero and its companions are able to make a break for it!

Vashti greets the Player drone with open arms and accolades as the player safely unites with the larger Machine base in the northeast. With this final message, the Demo Map is completed, and the saga of our unlikely hero ended.

In this final section, we really want the player and tester to consider the array of strategic and tactical choices before them. Even with a small number of pieces on the board like this, does it feel like there are multiple options and are they meaningful? We want to ensure that unit placement matters and can convey advantage – or disadvantage – without making every turn feel like an agonizing slog of micro-decision-making. Does the information about threats, and your own ability to counter them, feel appropriately telegraphed? Finally, on a more technical level, this final stretch has a few triggers at play than the previous parts, and we want to ensure that each these seem to work well. Play around with these, and the challenges offered by this section, and get a sense for how your various options feel. We hope you’ve enjoyed this brief series on the Demo Map, and are excited to begin a new series on the next Cantata Alpha Perspectives!